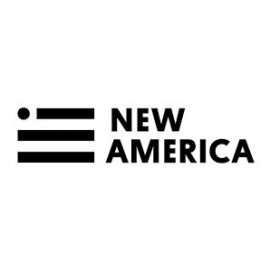 New America is a think tank and civic enterprise committed to renewing American politics, prosperity, and purpose in the Digital Age. We generate big ideas, bridge the gap between technology and policy, and curate broad public conversation. Structurally, we combine the best of a policy research institute, technology laboratory, public forum, media platform, and a venture capital fund for ideas. We are a distinctive community of thinkers, writers, researchers, technologists, and community activists who believe deeply in the possibility of American renewal.

New America was founded in 1999 to nurture a new generation of public intellectuals—scholars, policy experts, and journalists who could address major social, economic, and political challenges in ways that would engage the public at large—and to provide a set of blueprints for American renewal in an era of globalization and digitization. The initial challenge, which continues today, was to find the minds and foster the debates needed to guide American renewal in an era of profound, exhilarating, but often threatening change.

Under the leadership of founding president Ted Halstead and his successor Steve Coll, New America became a vibrant intellectual community and public policy institute. Its fellows and program staff have incubated and advanced breakthrough ideas in a wide range of domestic and international policy arenas. Today we have a staff of some 150 people, a budget of roughly $25 million, and a wide array of programs and undertakings. Our CEO and president is, Anne-Marie Slaughter, who assumed the role in 2013.

What They Said at the Time

“A new entry in the public policy community, the New America Foundation, [will] provide something different ... It will introduce younger voices, break out of the traditional liberal and conservative categories and produce unconventional ideas.”
— The New York Times (May 15, 1999)

“The latest think-tank in Washington, DC, the New America Foundation, is devoted to exploring the sort of political topics that will be at the heart of the digital age…It has scooped up a good proportion of the brightest American thinkers under 40 in its fellowship program.”
— The Economist (October 30, 1999)

“It's the think tank for Generation Next: a hot and hip collection of young, media- savvy scholars who are trying to reinvent the way Washington thinks.”
— The Washington Post (May 11, 1999)

As a civic enterprise, we are committed to the solution of public problems. Solutions at scale are likely to require the combined efforts of the public, private, and civic sectors as well as a blend of technology, policy, and politics. New America provides a platform that enables individuals and groups working on these solutions to drive different stages of change, from inspiration to implementation. Our work concentrates in the following categories:

New technologies change how we live and work—disruptions that in turn affect families, schools, social networks, civic organizations, political preferences, and foreign policy. They reshape what we buy and sell and where and how we invest our capital, creating new winners and losers. Over time, however, the nature and impact of these technologies depend on choices made by governments, businesses, civic groups, and communities. American institutions today—the workplace, the family, the schoolhouse, the doctor’s office, the corner store, the bank, the voting booth, the town hall, the military, the embassy—have only begun to transform and adapt to a digital economy and society. It is up to all of us to make the choices necessary to ensure that transformation upholds America’s founding values of liberty, equality, democracy, and justice.

New America’s staff, fellows, board, and alumni believe in the possibility of transformative change. For hundreds of years America has repeatedly managed to reinvent its society, economy, and political system in the face of sweeping changes at home and abroad, while still holding to the promise of a society in which every individual has an equal chance to live up to his or her potential. We believe that through the power of people, ideas, technology, and participatory democracy, we can and must renew ourselves again.